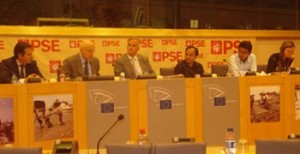 The NGO Platform on Shipbreaking arranged an event co-sponsored by European Parliamentarian (MEP) Mr. Robert Evans in the European Parliament in Brussels, Belgium on 16 September 2008, afternoon. The award-winning documentary Ironeaters on the social situation of the shipbreaking workers in Chittagong, Bangladesh screened at the beginning of the session. The screening was followed by a panel debate where YPSA’s Focal Person for Shipbreaking Campaign Mr. Md. Ali Shahin represented civil society. Other panelists were director of Ironeaters Mr. Shaheen Dill-Riaz, European Environment Commissioner Stavros Dimas and . In the discussion Mr. Shahin presented the information of the new report to all.

The event brought together European and international stakeholders from government, industry and NGOs to discuss how the EU can achieve the goal of environmentally sound and safe shipbreaking. It was important that YPSA represented there to represent the Bangladeshi NGOs and introduced the findings of the child labour report. The new report on the Child labour of Shipbreaking (‘Childbreaking Yards’) is launched on 16 the September’08 at the European Parliament through a Press Conference. However, it can be mentioned here that the ‘Childbreaking Yards’ report is the second international unique publication, on shipbreaking, of YPSA with two other international organisations like FIDH and NGO Platform.