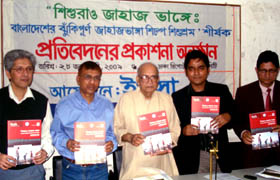 The report titled ‘Shishurao Jahaj Vhangge’ the Bengali version of ‘Childbreaking Yards: Child labour in the ship recycling industry in Bangladesh’ was released at a function at the Dhaka Reporters Unity on 28 January. YPSA and International Federation for Human Rights (FIDH) in the jointly prepared report, with technical support of NGO Platform on Ship Breaking, said at least 7,000 workers in the industry are below the age of 18. Chief guest of the program Prof Muzaffer Ahmad, chairman of Transparency International Bangladesh, launched this report. Mohammad Ali Shahin, YPSA official while publishing the report said, “We handed over a draft policy to the government. But the vital i
ssues have been discarded. We reject the truncated draft policy”