“YPSA will be bigger than the dreams in future if we all can continue the same effort that we have given from it’s inception to achieve the vision and mission of the organization. The outstanding commitment and contribution of all the general members and the staffs are the key factors of it’s successful journey of 27 years in the process of social development.” The President of the executive board of YPSA, Mr. Md. Shamsuddin Bhuyan (Tutul) expressed this today, on 30th July 2011, while sharing his experiences about YPSA, in the Central Coordination Meeting (CCM) of the organization in the conference hall of Lions Auditorium, Khulshi, Chittagong.

The meeting was jam packed by 132 senior and mid-level staffs of different branches, units and programs of the organization and led by the Chief Executive Mr. Md. Arifur Rahman and arranged by the Field Operation Division with the leading of the Director (Field Operation) Mr. Mahabubar Rahman. The meeting were also addressed by other members of the Executive Committee like-Mr. Samir Kanti Sarma, Mr. Liton Kumar Chowdhury, Mr. Md. Nurunnabi, Ms. Dilshad Aktar Chowdhury and also the Director (Finance) Mr.Palash Kumar Chowdhury, the Director (economic development) Mr. Murshed Chowdhury and above all the Advisor Dr. AQM Sirajul Islam Chowdhury.

Initially Mr. Mahabubar Rahman, the Director (Field Operation) , delivered his welcome speech and he requested all to keep silence for one minute to mourn the death of 40 students and others in the recent accident in Mirsarai. 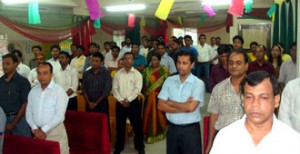 After the national anthem , the Chief Executive Mr. Md. Arifur Rahman greeted all and described importance of arranging such coordination meeting. He said, sharing of daily experiences with other colleagues is very important for a social development activist.
He added, YPSA is already implementing its activities in all the districts of Chittagong division and became one of the top five organizations in Chittagong and very much well-known to the government and international ngos for its excellent flow of development activities so far.
Mr. Mahbubar Rahman, Director (FO), explained all the field operation activities of the organization while he mentioned that YPSA is working in 12 districts including Dhaka and having more than two thousand staff members and implementing almost 50 programs and projects on different issues like-health, economic development, human rights, education, environment, bio-diversity. knowledge and capacity development. He also mentioned that YPSA has a wide range of network in national and international level and rewarded for its achievements.

The others members of the executive committee also delivered their valuable speech greeting all the staff members for their efforts and inspired them to carry out their projects and programs smoothly and effectively. They emphasized that there should no be any limitation to dream on growth of the organization and sky should be the limit.
Also, the Director (finance) and Director (economic development) respectively spoke on the progress of the business plan and Micro Finance and Micro Enterprise. Meanwhile, one of the senior officials, Mr. Md. Shahajahan spoke on the potentiality and challenges of Program Development and Resource Management (PDRM) unit. After this, the web master Md. Abdulla Al Sakir spoke on the importance of website and explained about the web friendly reports for the updating the site.
Later, the Chief Executive described about the idea to arrange a YPSA development fair in next November (18th to 20thNovember 2011  and also about the newly adopted YPSA smoke free policy. Finally, the Director (Finance) has shared about some future initiatives on well-fare fund, group insurance and etc.
The staff members actively participated in the question and answer sessions after every presentation by the speakers. Some senior staff members especially Mr. Vaskar Battachriya, Mr. Shahidul Islam, Ms. Nasim Banu, Ms. Khaleda Begum, Mr. Muhammed Ali Shahin provided their comments on all the agenda discussed in the meeting.
At the end, the chief executive Mr. Arifur Rahman , followed by the executive members, said that YPSA is always aware about the facilities of the staff members and try to ensure it as best it’s possible. He urged to continue their effort to achieve the target set in the 3rd strategic plan of the organization and also requested all to gain knowledge about the issues they are working with and to be updated with the latest information.
The President of the executive members , Mr. Shamsuddin Bhuyan thanked all for their active participations to make the meeting very successful and fruitful. And last but not least, the Director (FO) ended the meeting committing to arrange the CCM in a regular interval.
Next Experience Sharing Workshop for the “Safer Life of Girl Domestic Workers” project held Training workshops on Bamboo propagation & Enrich Longevity of bamboo Previous