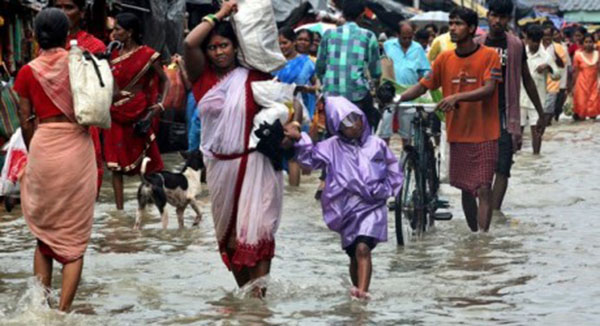 New global rules outlining the rights of people and communities who lose their homes, land and livelihoods due to the effects of climate change have been approved.

The approval, by an eminent group of international lawyers, United Nations officials and climate change experts came in Australia after months of preparatory work around the world.

Climate displacement is already underway in many, primarily Asia-Pacific, countries such as Bangladesh, the Maldives, Papua New Guinea, Solomon Islands, the United States and elsewhere.

It is expected to affect many tens of millions of people in coming decades.

A government report released a report in 2011 indicated that in Australia, nearly 300,000 coastal properties were under serious threat, with a combined value of more than $225 billion.

The newly adopted Peninsula Principles on Climate Displacement, a name inspired by the Mornington Peninsula, bear the Victorian capital, Melbourne, where the meeting took place, are an attempt to build a set of rules to assist governments to provide solutions to the growing numbers of people in many countries who are facing the loss of their homes and lands due to climate change.

Scott Leckie, director of the Geneva-based NGO Displacement Solutions, who organised the event, believes the new principles have considerable potential to repair what many see as unsalvageable situations.

“Governments have allowed climate change and resultant displacement to occur, so it is only logical that Governments should be called upon to fix this growing mess”, he said today.

“We hope that the Peninsula Principles approved this weekend will be quickly applied by governments the world over, UN agencies and other inter-governmental bodies.

They should also form the basis for new laws and policy approaches to a problem that is already occurring throughout the world.”

Most estimates indicate at least 200 million people face the possibility of displacement due to changes in the climate.

That will occur in places as diverse as the Caribbean coast of Panama, the coastline of indigenous Alaska, the islands of the Maldives and the Pacific and the river areas of Bangladesh.

Arifur Rahman of the Bangladeshi NGO Young Power for Social Action, who participated in the Peninsula Principles group, spoke of the hope the Principles will give the millions already displaced in climate-ravaged Bangladesh.

“It is our sincere hope that these new principles will be embraced by my government and, indeed all governments, so that the victims of climate change will get a chance to start life anew with new land, new homes and a sense of justice”.

The Peninsula Principles provide a detailed blueprint for preventing displacement due to environmental changes.

They also offer planning measures to cope effectively with such changes when they occur, and the vital issue of planned relocation measures to protect the rights of particularly vulnerable people and communities in atoll nations such as Kiribati and Tuvalu, coastal areas in Asia and indigenous areas in Central America and the Arctic.

Professor Bonnie Docherty of Harvard Law School , who attended the session, noted her “hope that the principles become a universally applicable tool that can be used by people, governments and the UN everywhere to find practical solutions to climate displacement wherever it occurs”.

The Peninsula Principles were developed on the basis of current international law; several thousand interviews carried out over the past five years in heavily affected countries and were most recently influenced by comments received from the public at large who had access to the draft principles on the internet.

Perth-based lawyer David Hodgkinson who helped craft the principles said climate displacement is real and these principles provide a one-stop shop for governments seeking guidance on how best to address this growing crisis.

Displacement Solutions has led international efforts to protect the rights of climate-displaced communities, including activities to secure new housing and new land for people forced to flee their homes and lands since 2008.