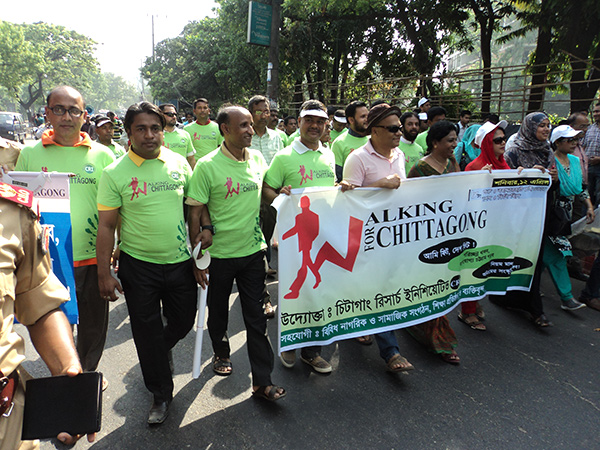 Several hundred residents of Chittagong city walked major thoroughfares, campaigning for building a habitable port city on the way.
The walkers started off from Bahaddarhat Flyover around 8:00am and reached DC Hill after the nearly three-hour march they called “Walking for Chittagong” on 12 April 2014.

During the awareness raising campaign, they shouted slogans like “Ami fit, desh fit” (if I’m healthy, the nation is healthy), “Porichchhanna Thakbo, Basjogya Chattagram Gorbo” (we will keep clean and build up a habitable Chittagong), and “Niom Manbo, Oniomer Sangskriti Bhangbo” (we will abide by rules and end the practice of lawlessness).
Chittagong Research Initiative (CRI), supported by different civic, social and educational organisations and individuals, organised the programme with an aim to make the city dwellers aware about their responsibility to make the city habitable. YPSA and Dhumpan Mukto Projonmo (Smoke Free Generation) attended the program.

Along the way from Bahaddarhat to DC Hill, the walkers talked to pedestrians, urging them to keep the city clean and comply with traffic rules for reducing gridlocks. The campaigners also took part in cleaning activities on the way.
Dr Hossain Zillur Rahman, former adviser to a caretaker government, and chief coordinator of CRI, called the campaign the first step towards building a habitable city.