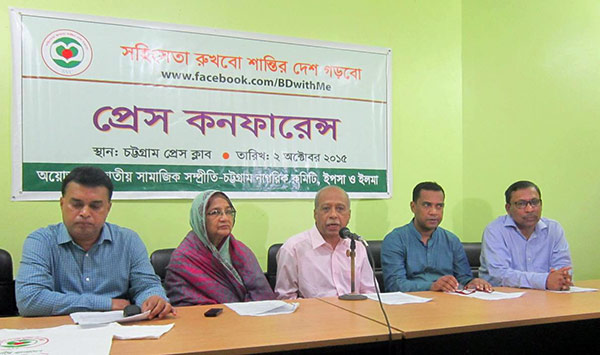 “Usually people in Bangladesh are peaceful. But sometimes some opportunists and self-seeking people make mischievous moves to break the social harmony and peaceful co-existence. They tried to use political issues and religion; however, they did not succeed. Peaceful people in our country impeded their mischievous move all the time.” Speakers said in a press conference on “Stop Violence and Build a Peaceful Bangladesh” jointly organized by YPSA, Stop Violence Coalition (SVC) and ELMA. The press conference was held at Chittagong Press Club on October 2, International Day of Non-Violence.

The UN General Assembly came up with a resolution in 2007 to establish the International Day of Non-Violence. The day aimed to spread the message of non-violence, including through education and public awareness, around the world. The resolution reflected universal respect for Gandhi and his philosophy. October 2, which is Gandhi’s birthday, was allocated as the day’s date. The first International Day of Non-Violence was on October 2, 2007.