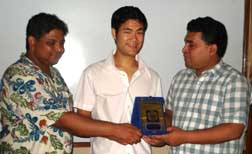 YPSA said farewell on 6th June 2007 to one of its favorite volunteers Richard Yuwono. Richard came to YPSA in June 2006 as a Youth Ambassador for Development, a program run by the Australian government agency AusAID. Working with the ICT4D unit as an IT officer, Richard assisted the organization and many individuals in developing their capacity in IT, video editing, and how to get rid of that nasty virus in your computer! Always creative in his suggestions, during the past year work he has done for the organization and the interest he has shown in Bengali culture has earned him a place in the YPSA family.