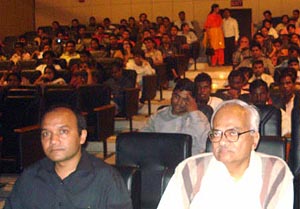 Mr. Mohammad Ali Shahin, Program Officer of YPSA gave introductory speech on the reason of this film show. He welcomed every audience for attending this film show. He said “YPSA has been implementing Advocacy program for a public policy to ensure human rights in ship breaking industry supported by Manusher Jonno Foundation (MJF). YPSA started the first long term campaign program to influence the policy makers to formulate a policy for the shipbreaking industry in Bangladesh. To implement our goal we contact regularly with workers and their family members, owners, contractors, local government, Local public administration, civil society and so on. So, YPSA decided to screen this famous film for the concerned persons of the Chittagong”

Mr.Abul Momen, reputed writers, authors and residential editor of the leading national newspaper of Bangladesg, the Daily Prothom Alo declared the launching of the film show. He thanked the film maker to make such a documentary which got several international awards.

Mr. Shahin Dill – Reaz, the film maker acknowledged YPSA for arranging the screening film show in Chittagong. He said this documentary has already been screened and generated much interest at several international film festivals and has been honoured with the Grand Prix at Le festival International Du Film D’ Environment ( Paris, France) in December 2007, First Prize at the One-World –Award NRW ( Koln, Germany) in September 2007 and First Prize at the Film South Asia ( Kathmandu, Nepal) in October, 2007.
“ Ironeaters” the title of the film hints at the almost superhuman endurance and drive that enables these destitute, desperate people to manually break apart colossal old ships, turning them into sheets of metal.
After the ending of film show open discussion was arranged. Film maker answered the entire question asked by viewers. According to him “I requested for the permission to shoot the film from the Bangladesh Shipbreakers Association (BSBA) and they suggested the location. PHP administration allowed us nearly four months of unrestricted shooting. It was a seven member crew, with four or five of us on location at a time-the camera assistant, the sound recorders and I. We visited the workers in the several times. It was very important to show where the workers came from.”

Shahin Dill-Riaz again said “The place where ships are dismantled is not far from my village home. Access to the yards was strictly forbidden for anyone who didn’t work there. But we heard lots of stories about the colossal ships and the serious industrial accidents. My decision to make a documentary on ship-breakers was triggered by Brazilian photographer Sebastiao Salgado’s remarkable photos on the subject. I started researching in 2001.”

The film was shot between January and May 2005. The filmmaker and his crew lived with the workers and filmed them for a total of five months. Ironeaters was edited by Berlin by Andreas Zitzmann and post production was done in Humburg.

As one worker puts it “if you are really hungry, you would be able to eat anything, even if it is iron”.