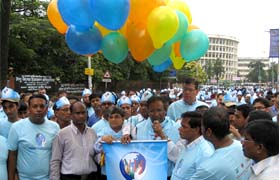 International Youth Day 2009 has been observed significantly through the direct leadership of Department of Youth Development in Bangladesh on 12 August. The Day was started with a colorful rally from National Museum, Shahabag and ended at Central Shahid Minar, Dhaka University Campus, the Capital City of Bangladesh leaded by Honorable State Minister, Ministry of Youth and Sports Mr. Md. Ahad Ali Sarker in associated with the Mr. Md. Mahbub Ahmed, Secretary, Ministry of Youth and Sports; Mr. Md. Fakrul Islam, Director General of Department of Youth Development, and other Government officials. About eight hundred youths, government officials, representatives of NGOs, Donor, Embassies and youth clubs participated in the rally.

Theme of this year of the day is “Sustainability: Our Challenge. Our Future”. More than twenty representatives from Young Power in Social Action (YPSA) also took part in the rally and played a significant role. The rally was ended with an encouraging speech by the Minister, Ministry of Youth and Sports. All electronic media broadcasted the event and printed media published a special supplement on the IYD’09.

After the Rally, the Department of Youth Development (DYD) organized a Seminar highlighting the theme of this year. The seminar was sponsored by Plan Bangladesh. Around 120 representatives from Youth Clubs, NGO’s, Donor, Embassies and government officials took part in the seminar. The State Minister, Ministry of Youth and Sports was the Chief Guest while the Secretary, Ministry of Youth and Sports was Special Guest. The Director General of DYD spoke in the seminar as the Chair. After the inauguration of the Programme, Mr. Romony Mohon Chakma, Director (Planning), DYD presented the Keynote paper highlighting the three areas as Economic, Social and Environment development. After the Seminar, a recommendation paper was made for the concern ministry for their further actions. From YPSA, 2 (two) participants took part in the Seminar. It has to be mentioned that two youths including one persons with physical disability were awarded with 50,000 (fifty thousand) taka each for self employment by HOPE’09, Bangladesh. The honorable Chief Guest and Special Guest handed over the cheque to the youths.