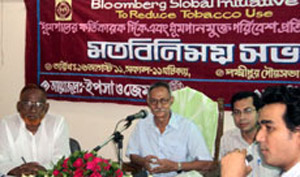 A Smoke Free Coalition has been formulated by the active members of civil society groups and local government in Laxmipur in a sharing meeting, on 16th August 2011, in presence of the Mayor, Mr. A.M. Taher, of Laxmipur Pouroshova. Its also decided that the coalition will be led by the Panel Mayor of the Pouroshova. The Mayor, of Laxmipur, committed to ensure 100% smoke free of the Pouroshova office premises as he has already declared the Pouroshova office as smoke free. The Mayor also admitted to support the smoke free initiatives in future. He informed that the fine for violating this direction is 1000 taka not only 50 taka. The meeting was organized by YPSA with the support of CFTFK and Bloomberg Initiative. The meeting was also addressed by several councilors of the Laxmipur Pouroshova, representatives from NGOs, Media, Teachers, Religious leaders, Lawyers etc.