A meeting titled as `Smoke Free Public Places and Environment’ is arranged in Khagrachori,one of the district of hill tract areas, on 29th September in the conference hall of the pouroshova. The meeting was presided by the Mayor, Mr. Rafiqul Alam, of the district while the  also Civil Surgeon ,Dr. Hassan Imam Chowdhury, attended the meeting as chief guest. The Civil surgeon said the tobacco use conditioned should be monitored regularly and its not possible for his office to check the whole pouroshova area. He added that he needed support from NGOs and pouroshova and civil society groups. The mayor said he will start a massive effort to control tobacco use in Khagrachori.  He added he would ensure smoke free Khagrachori pouroshova gradually. He declared the pouroshova office, government hospitals, schools. The meeting was also addressed by different representatives from civil society groups,  media, religious leaders, NGOs,business community etc. A coalition is formed at the end of the meeting and all committed to work together to control tobacco use and ensure smoke free public places in Khagrachori. 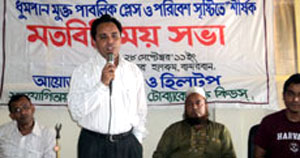 “Bandarban Pouroshova will do everything possible to reduce and control tobacco uses in the district. It will soon circular   a notice to have smoke free dialogues in all the license plates of the vehicles, banning tobacco advertisement, putting smoke free signs in all the government offices and tourist spots” , said the Secretary , Mr. Towhidul Islam, of the Bandarban Pouroshova having verbal consents from the Mayor of the pouroshova.    He said it in a meeting organized by YPSA at the conference hall of Bandarban pouroshova, on 28th September 2011.