Plan Bangladesh and YPSA distributing 10 Million Taka among 2000 flood affected families at Ramu upazila under Cox’sbazar district. ADC General of Cox’sbazar Mr. Sayed Mohammed Nurul Basir inaugurated the distribution among the 300 flood victim families from Chackmarkul union office on 8 July. Each of the beneficiary family received 5,000 taka in cash to ensure food and nutrition supports to the children . Rest of 1700 families will get the emergency cash on 9, 10 and 11 July. 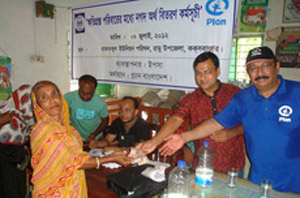 Next YPSA Bi-AGM held and elected Executive Committee 2012-13, 2013-14 Meeting on “Co-management activities for conservation of forest and biodiversity ” held Previous