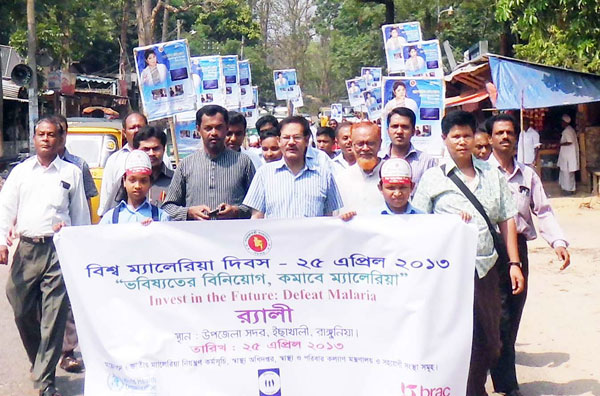 YPSA organized rally and discussion meeting at Upazila Health Complex, Rangunia to mark the World Malaria Day 2013 with the theme “Invest in the future. Defeat malaria”. Dr. Harun Ur Rashid, Upazila Health Officer was present as chief guest while Jigarul Islam Jigar presented the keynote in the meeting. Jarigan (epic song of Bangladesh) performed at Shafarbhata village market to raise awareness of the dangers of malaria and the main means of prevention.

World Malaria Day was instituted by WHO Member States during the 2007 World Health Assembly. It is an occasion to highlight the need for continued investment and sustained political commitment for malaria prevention and control. It is also an opportunity for new donors to join the global malaria partnership, and for research and academic institutions to showcase their scientific work.

Over the last decade, the world has made major progress in the fight against malaria. Since 2000, malaria mortality rates have fallen by more than 25%, and 50 of the 99 countries with ongoing transmission are now on track to meet the 2015 World Health Assembly target of reducing incidence rates by more than 75%. A major scale-up of vector control interventions, together with increased access to diagnostic testing and quality-assured treatment, has been key to this progress.

But we are not there yet. Malaria still kills an estimated 660 000 people worldwide, mainly children under five years of age in sub-Saharan Africa. Every year, more than 200 million cases occur; most of these cases are never tested or registered. A recent plateauing of international funding has slowed down progress, and emerging drug and insecticide resistance threaten to reverse recent gains.