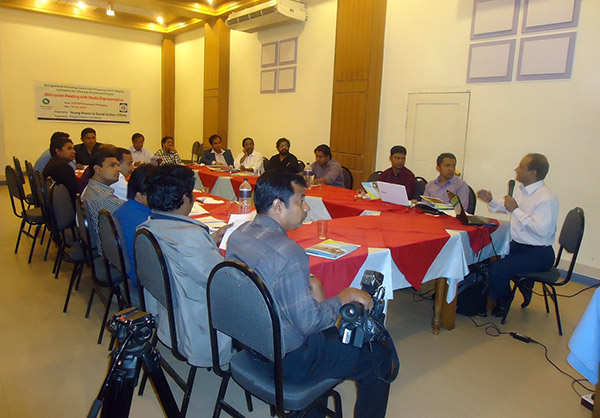 The discussion meeting was presided over by Mr. Nasirul Haque, News Editor of the Daily Suprobhat Bangladesh. The media guests were welcomed by Mohammad Ali Shahin, Program Manager of YPSA. He discussed about the role and contribution of journalist on the climate displacement issues. He briefly includes its establishment, objectives, mission, completed activities and plan for future.

In the meeting, Mohammad Shahjahan, Team Leader of Housing, Land and Property (HLP) Rights Initiative project of YPSA shared information on present and future scenario of climate displacement issue in Bangladesh, activities and achievement of HLP program and advocacy action plans for ensuing rights of climate displaced peoples in Bangladesh. After his presentation, participants have participated in an open discussion and shared their idea and commitment to publish report and documentary video news in their media. In the meeting, YPSA informed the media representatives that the news/ documentary conducted by respective journalists will be presented at the planned national civil society program on the climate displacement at Chittagong during last week of February.