The meeting was participated in by 11 Deputy Commissioner (DC) of eleven districts of Chittagong division, Additional Divisional Commissioners, Director-health, Deputy Director of local government and other government officials. This is the first time in Bangladesh where all the DCs have come together to talk about the implementation of the TC law. The meetings was also participated by several other representatives from SF coalition, Chittagong City Corporation, transport associations, restaurant owners associations, market associations, education institutions, NGOs, health officer of civil surgeon office, electronic and print media etc. 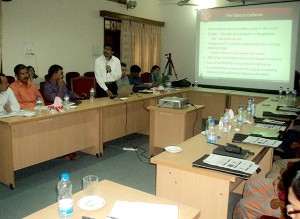 The chief guest, Mr. Mohammad Abdullah, Divisional Commissioner of Chittagong division, provided some directions to all DCs for implementing the Tobacco Control law in his speech. He said to conduct mobile court and taskforce meetings regularly in all districts of Chittagong division to enforce the Tobacco Control Law, to provide district report on TC law implementation status. He also said that Divisional Commissioner office will take initiative to arrange capacity development training with magistrate, district health officer and local government of 11 districts for strengthening the implementation of Tobacco control law which will be held on November 2014. He also said that a coordinated effort is needed from all the DCs of the division to ensure a smoke free environment in Chittagong. 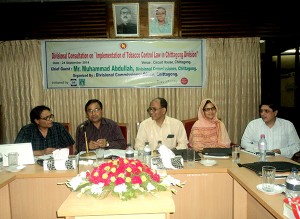