YPSA arranged a debate competition at the Chittagong Chemical Complex (CCC) High School, Barabkunda aiming for “Stop Violence and Build a Peaceful Bangladesh”. The subject of this debate was “Only Prevention of Domestic Violence Can Ensure Social Harmony and Prosperity”. Two teams were debating on the topic, one group was in favor of this topic and another group was against it. The competition ended followed by a signature campaign. 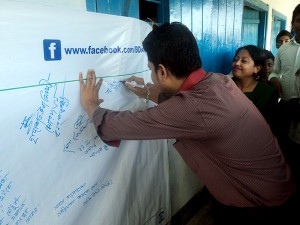 The debate competition was held on 06 November, 2014 under the campaign on BD with me (www.facebook.com/BDwithMe).

All debaters present their best to establish his/her arguments with showing reliable data, information and logics. In generally, in favor group said that family is the smallest unit of society, and society is made by family. So, social harmony is easily deteriorated if family harmony is deteriorated. On the other hand, if the family members are well disciplines and domestic violence will hardly be seen. Aftermath we can easily retain social harmony, which will be ensured national harmony and prosperity. 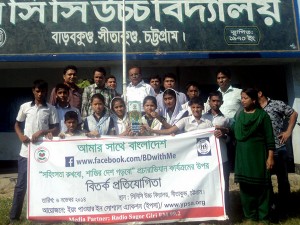 In against group said that, domestic violence is not only the responsible of imbalance of social harmony, they accused some other factors for disturbance of social harmony as, youth unemployment problem, drug abuse, restless, political instability, miss use of power and law, bribes and some social evils etc.

After debate competition a prize giving ceremony was held, which was chaired by Chairman of Barabkunda Union, Sitakunda. In lastly, Chairman of Barabkunda Union shared that UP body is always ready for stop violence at community. He said that students are the future leader of Bangladesh. They can play a pro active role on prevent violence at community.