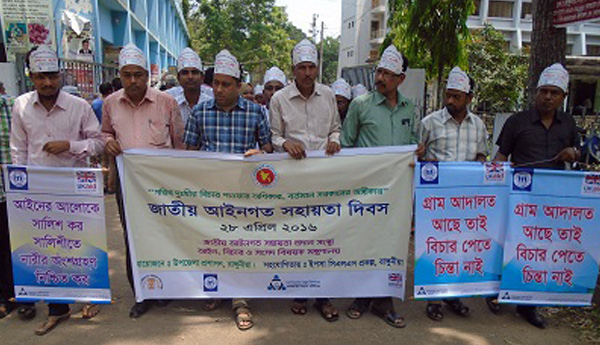 Government of Bangladesh declared April 28 as the National Legal Aid Day. The day aims building an effective and strong legal aid services to ensure free access to justice of the poorer section of the society. The theme of this year’s observance of the day was “Garib-dukhir Bichar Pawar Odhikar Bartoman Sarkarer Ongikar (Government is Committed to Provide Legal Support to the Poor)”.

YPSA-CLS has participated District Legal Aid Committee (DLAC) events at Chittagong and Cox’s Bazar Districts. In the morning DLAC brought out the colorful rally from Chittagong and Cox’s Bazar Judge Court premises in the morning. The rally paraded major streets of the city. After the rally, district legal aid committee chairman and district and session Judge inaugurated a daylong legal aid fair, where YPSA-CLS project installed a stall on Community Legal Services at the premises of Chittagong District Judge Court.

A discussion meeting was held highlighting the theme of the Day in Chittagong District Judge Court, auditorium in the afternoon. At discussion speakers were said that Article 27 of the Constitution of People’s Republic of Bangladesh provides ‘All citizens are equal before law and entitled to equal protection of law’. In these circumstances, it is the duty of the state to create the opportunity for getting equal legal protection for all citizens. As well as Government and some Non Government Organizations are now working on providing legal aid and education services to the underprivileged and socially excluded group of people at the community. Finally, chairperson of this discussion Mr. Nurul Huda (Chairman, District Legal Aid Committee) call for establishing a society free from exploitation based on equity and spread the news of legal aid at root.