Top officials of government and non-government organizations, educational institutions, women’s organizations, along with representatives of civil society and media houses attended the Round Table meeting.
Mohammad Shahidul Islam, Program Coordinator (Campaign and Partnership) of YPSA CEVEC Consortium in his inaugural speech briefed about the background of the project, involvement of Bangladesh government with it. He also introduced the audience to the donor agency GCERF.

Team Leader Ms. Khaleda Begum described the progress of the project activities. She said that all the stakeholders, students, women groups and youth and unemployed people are the major actors of this project and their support would build the peaceful Cox’s Bazar in future which ultimate goal will make harmony and resourceful Bangladesh.
Program Coordinator (Training), Rajat Barua conducted the open discussion session and Mohammad Harun, Program Manager, Prabal Barua, M&E Officer and Bana Ratna, MIS and Documentation Officer facilitated the session.

Discussants emphasized that the government, non-government and civil society organizations and people from all walks of life should work together to countering and preventing violence and extremism. Discussants at the meeting also underlined strong family bondage, moral and religious education, elimination of unemployment, income generating opportunity, awareness building in educational institutions and formation of public opinion to counter violence and extremism. In the house, all participates expected that it will help to achieve goals in the process of project implementation. 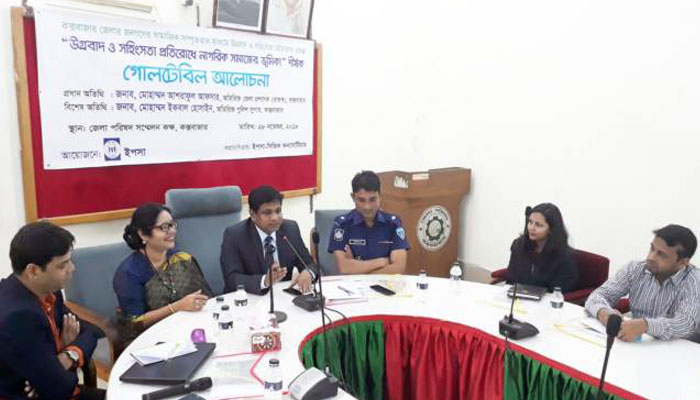