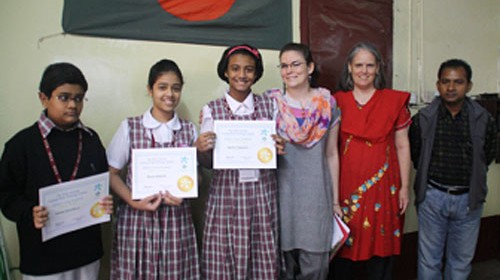 Displacement Solutions announced writing contest under the Coastal Kids Project to promote further incentive for the students to dive into learning about climate change. November 1st, 2012 marked the commencement of the Coastal Kids writing Contest. Students of class five of William Carey Academy in Chittagong, Bangladesh (as a partner of YPSA) and class six from Sorrento Primary School in Victoria, Australia were invited to write a 500-word essay on the topic of “What Climate Change Means to Me, My Community, My Country and My World” as part of the First Annual Coastal Kids Writing competition. WCA students were thrilled to enter the competition.

The students worked hard to prepare quality essays. Planning and research was conducted at home while all drafting, revising, and proofreading occurred during special after school hours. After several weeks of preparation, the students rushed to the computer lab to type their carefully drafted essays. Typing and refining the essays consumed the afternoons for the competitors. After a month of hard work, around 20 students victoriously completed their essays and submitted them to the judges to review. A panel of judge, comprising member from WCA and YPSA, was reviewed the all writings. After intensive review the all writings panelist were come to a consensus to declare the best three writings though it was very tough to choose the best three among twenty.

On 17th December’12 Mr. Mahiuddin Hafiz, Program Manager of HLP project of YPSA, announced the winners for the top three places during WCA’s elementary opening ceremony. Each winner was awarded an amazon.com gift card, as well as a framed certificate and congratulation letters. It was exciting to witness the entire class five group rejoice with the winners. Adeeb Chowdury, Agatha Talapatra and  Aanan Abdullah won the first place, second place and third places respectively.

The class five students also replied to pen-pal letters sent from the students at Sorrento Primary School. The classes are enjoying getting to know one another and they look forward to the next Skype conference where they will discuss what they have learned thus far about climate change. The WCA class five students have already learned a great deal about climate change and are determined to assist in reducing its negative effects on their county and world. The coming semester is sure to bring even further insights into this important topic.