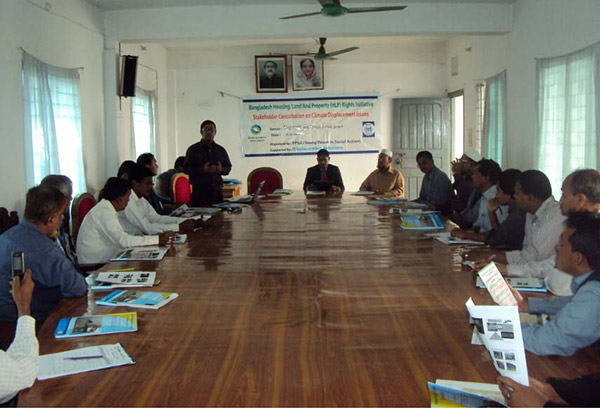 Continuous sea-level rise and massive erosion, both manifestations of global climate change, are shrinking the size of Sandwip upazila and this is on the verge of disappearance. Climate displaced people are common phenomenon in this upazila and the number of suffered peoples are countless. Speakers are very much worried in the stakeholder consultation meeting on climate displacement which was organized by YPSA on 25th November’13 with the participation of GOs, NGOs, journalists and civil society groups working for Climate Displaced People under YPSA’s Housing Land and Property Rights Initiative project at Upazilla conference room of Sandwip Upazila Parishad supported by Displacement Solutions.

During the open discussion project coordination of Society for Development Initiative (SDI) mentioned that Climate change has effected intrusion of saline water into the soil of these islands. This has caused an alarming decline in the production of different species of paddy, jute, betel leaf, coconuts, date and wheat.
He said, 600 square miles of the Sandwip Island has already gone under the sea, with its area shrunken to mere 70 square miles. In 1987, the area of the island had shrunken to 258 square miles in 1920, 137.16 square miles in 1981, and 100 square miles in 1987.

Many of the local representatives mentioned that during the last 25 years, a large chunk of the island has gone under the Bay of Bengal, as well as the Meghna estuary. Even a few decades back, there were Katgor, Ijjotpur, Hudrakhali, Nayamosti and Batajora union parisads at the island. Since then, all those localities have disappeared under water.  Every year, thousands of people become “climate displaced people” at the island, especially during the rainy season.