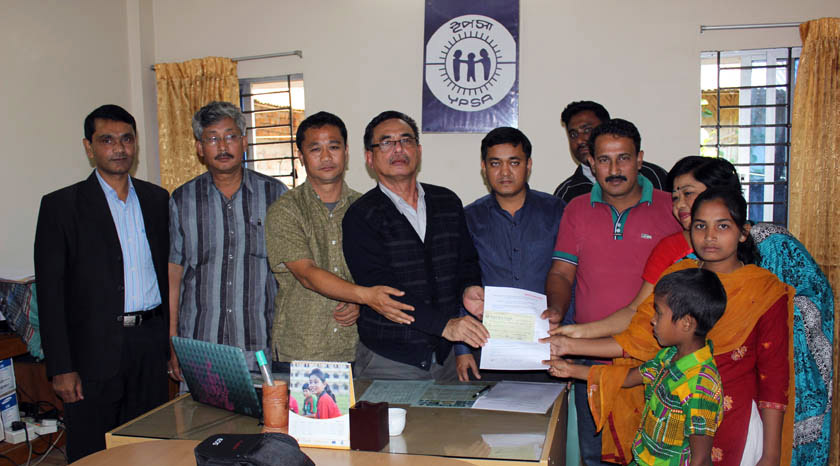 Ms. Sharmin Akter, daughter of deceased Jarina Khatun of Kowkhali Upazila received financial assistance of Taka 100,000 from Actionaid Bangladesh with the support of YPSA in an occasion on 14 December. Jarina Khatun was killed in a garment factory collapse on 24 Aprill 2013.

ActionAid Bangladesh and YPSA are supporting to enable the child to continue schooling up to her maturity (18 years). This support will also contribute to her needs of food, nutrition and health care.

Sharmin Akter is now 14 years old. She lives with her uncle at the Tangipara village, Kawkhali Upazila of Rangamati district. She has three sisters and one brother. She is younger sister. Her father was killed by a falling tree on the mountain at their village in 2004 . The poor family faces crisis for losing only earning source. Jarina Khatun joined the clothing factory at Rana Plaza with her older daughter in order to ensure their family survival.

A fixed deposit account has been created at Sonali Bank, Kawkhali Branch for Sharmin Akter. Interest from FD account can be withdrawn for the purpose of continuing education of Sharmin. Upon reaching the age of 18 years old, she will be able to withdraw full money after the expiry period of FDR account.