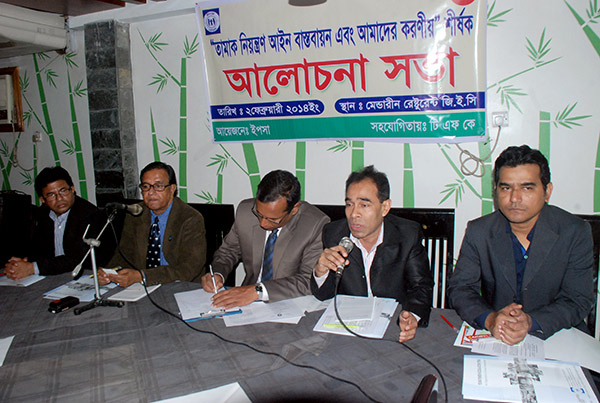 “We will start conducting mobile court soon but, only mobile court conducting is not enough to stop smoking in the public places. It needs strong public awareness as well” said Additional District Commissioner of Chittagong Mr. Sanaullah Khan while he was present as chief guest in a meeting titled  “Implementation of Tobacco Control Law and our Responsibilities” held at Mandarin Restuarent, Chittagong organized by YPSA with the support of Campaign for Tobacco Free Kids on February 2, 2014 .

The meeting was presided over by Mr. Nasirul Hoque, News Editor of The Daily Suprovat Bangladesh. The welcome speech was delivered by Mr. Md. Mahabubur Rahman, Director (Social Development Program) of YPSA. In the meeting, Nasim Banu, Team Leader of Smoke Free Project of YPSA shared information on Tobacco control situation in Bangladesh, harms of tobacco use, Tobacco Control law, some pictures of the violation of Tobacco control law in Chittagong and some suggestion to implement the TC law. After her presentation, participants have participated in an open discussion and shared their idea and commitment to implement the Tobacco control Law.