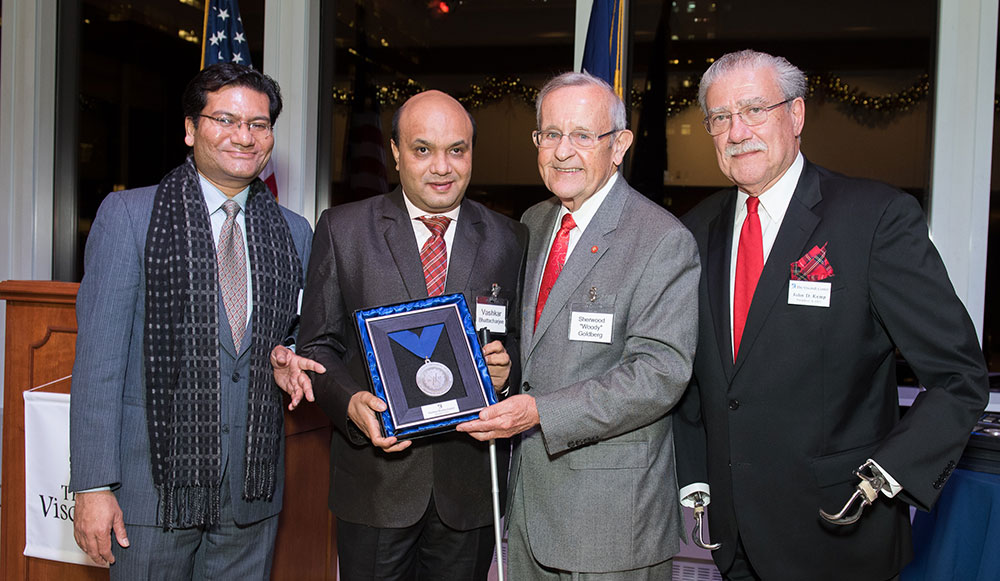 The Viscardi Center announced nine recipients of the 2017 Henry Viscardi Achievement Awards at a special ceremony held on December 4 at the Mutual of America building in New York City. Awards were established to honor the legacy and vision of the Viscardi Center’s founder, Dr. Henry Viscardi, a leading disability rights advocate who himself wore prosthetic legs. These international Awards, first bestowed in 2013, recognize exemplary leaders in the disability community who have had a profound impact on shaping attitudes, raising awareness, and improving the quality of life of people with disabilities.

Each year, the Henry Viscardi Achievement Awards draws nominations from cities throughout the U.S. and countries around the world. This year’s Awards Selection Committee is co-chaired for the fifth consecutive year by Robert Dole, former U.S. Senator, along with Sherwood “Woody” Goldberg, Esq., retired U.S. Army Colonel and current Senior Advisor for Asian Affairs at the Center for Naval Analysis.

Vashkar is selected as one of nine recipients of the 2017 Henry Viscardi Achievement Awards! Vashkar Bhattacharjee, a person with visual impairment, resides in the port city of Chittagong in Bangladesh. Work As the National Consultant for Accessibility in the Access to Information (a2i) Programme of the Prime Minister’s Office in Bangladesh.

Vashkar is involved in creating an enabling environment for innovations to come up for empowering persons with disabilities which are then scaled up and made accessible for all. His current focus is on implementing inclusive university in University of Chittagong, one of the largest and most prominent universities of Bangladesh.

Vashkar is also serving as a Program Manager looking after the disability portfolio of Young Power in Social Action (YPSA), a social development organization. Before joining a2i, Vashkar had worked with YPSA to develop a WSIS award winning project, Multimedia Talking Book, which has made education accessible for students from grade 1 to grade 10. Also he has managed a team of persons with disabilities in YPSA to develop Bangladesh’s first Accessible Dictionary that can make learning English and Bangla language easier for readers with visual disabilities.

Vashkar is the focal person for DAISY, (Digital Accessible Information System), Accessible Books consortium, Federation of DPO’s Sitakund in Bangladesh and the 2nd Vice President of GAATES. Vashkar has completed Duskin leadership training from Japan and completed his Master’s degree from university of Chittagong.   It’s a big honor as a citizen of Bangladesh to received Henry Achievement Awards  for his work to Promote Accessible Books and Information for empowering people with disabilities through innovation.