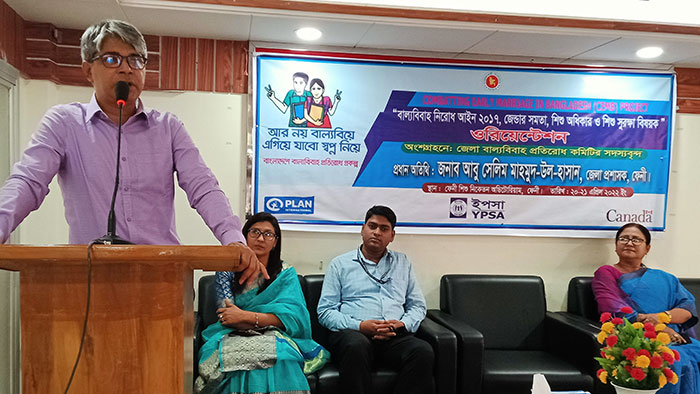 A two-day orientation workshop on skill development was organized by Feni District Administration with the participation of members of District Child Marriage Prevention Committee, under the project “Combating Early Marriage in Bangladesh” being implemented by YPSA with the support of Global Affairs of Canada, Plan International Bangladesh.

In his speech at the concluding session, the Hon’ble Deputy Commissioner said that the government has taken various initiatives and plans to prevent child marriage. In order to implement this initiative, the responsible people need proper knowledge and skills in that regard. I think this two-day orientation held with the members of the District Child Marriage Prevention Committee will help the members to fulfill their responsibilities. Orientation sessions are important enough and are linked to the government’s sustainable development goals.

All government and non-government members of our district committee should have a clear idea about child marriage prevention law, gender, gender equality, child rights, child protection. At the same time, he or she has to play a responsible role as a member of the committee. I would like to thank YPSA on behalf of the district administration, Feni for cooperating in such an event. We want to take a bigger plan to declare Feni district child marriage free. He added.

He hoped that every member of the District Child Marriage Prevention Committee would take initiative in their respective sectors to declare Feni district child marriage free.